With the publication of “Current safety concerns with human papillomavirus vaccine: a cluster analysis of reports in VigiBase” in the journal Drug Safety this year, UMC contributed original research to the ongoing global conversation regarding safety signals for the human papillomavirus (HPV) vaccine.

Work on the topic of the HPV vaccine was initiated in the spring of 2015 when UMC researchers were contacted by the national pharmacovigilance centre of Denmark, the Danish Health and Medicines Authority (DHMA). UMC was asked to assist in interpreting a large local cluster of reports of postural orthostatic tachycardia syndrome (POTS) – a dysfunction of the autonomic nervous system – from a specialist clinic in Copenhagen. A physician there had noted a larger-than-expected number of referrals to the syncope clinic for young girls with a diverse set of symptoms, such as headache, dizziness, fatigue, vision disturbances and abdominal pain. After undergoing various tests of the autonomic nervous system many of these girls were found to have POTS. The DHMA requested UMC’s help to explore whether this syndrome was being reported from any other countries in the WHO Programme for International Drug Monitoring. 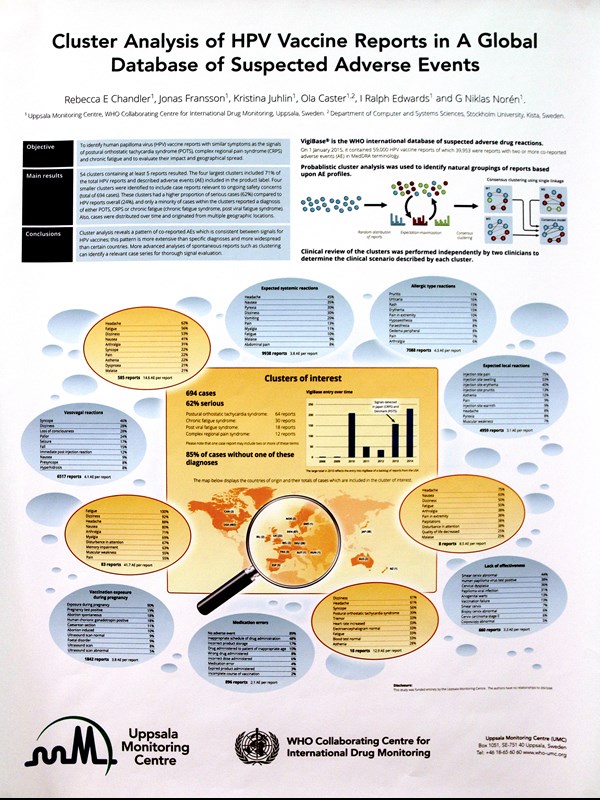 POTS has been a poorly-understood and largely under-recognised diagnosis, as revealed in the relative paucity of published data regarding its pathophysiology and epidemiology. Prior to 2013, there had been only approximately 80 case reports of POTS received into VigiBase, WHO’s global database of suspected adverse drug reactions, for any medicinal product. A review of the Danish case reports revealed that they included additional terms that were also found in many HPV vaccine reports in VigiBase from other countries.

Given the relative lack of awareness of POTS, UMC’s researchers speculated that traditional signal detection methodology – relying on disproportionality measures at the level of single drugs and adverse event terms – might not fully characterise this signal. The hypothesis was that different reporters might use different adverse event (AE) terms to describe similar conditions, and yet there could be enough overlap between these reports to identify subgroups of HPV vaccine reports with similar AE pro les. A novel data-driven approach to signal exploration, AE cluster analysis, was used to test this hypothesis.

New approaches to the analysis of spontaneous reports may better identify the relevant case series for thorough signal evaluation.

The clustering algorithm targeted all HPV vaccine reports that included two or more adverse drug reaction (ADR) terms and had been received into VigiBase before January 1, 2015. It generated a total of 54 clusters containing at least ve reports. The four largest clusters contained 71% of HPV reports in the analysis, and the case series de ned by these clusters described ADRs that are included in the product label, namely local and systemic reactions, allergic/hypersensitivity reactions and vasovagal episodes. Four smaller clusters were identi ed that contained case reports relevant for consideration in assessment of the ongoing safety concern.

Traditional statistical signal detection methodology, which is based upon disproportionality between single drug–AE pairs, highlights only those cases in which a diagnosis of interest, such as POTS, is reported. In contrast, in UMC’s analysis, reports with and without the diagnosis of POTS based upon the pattern of multiple reported AEs, were clustered together. This allowed for the identification of additional case reports which were relevant to further assessment of the signal.

One of the important messages from the study is that new approaches to the analysis of spontaneous reports may better identify the relevant case series for thorough signal evaluation.